Want a simple bleach free alternative to get rid of those mold spores that build up in your bathroom or shower? Try some Ceylon Cinnamon Leaf Oil to prevent and remove mold. Child & pet friendly. Zero toxic chemicals. All natural. Not only does it smell great, unlike bleach Cinnamon Oil does not not stain easily. 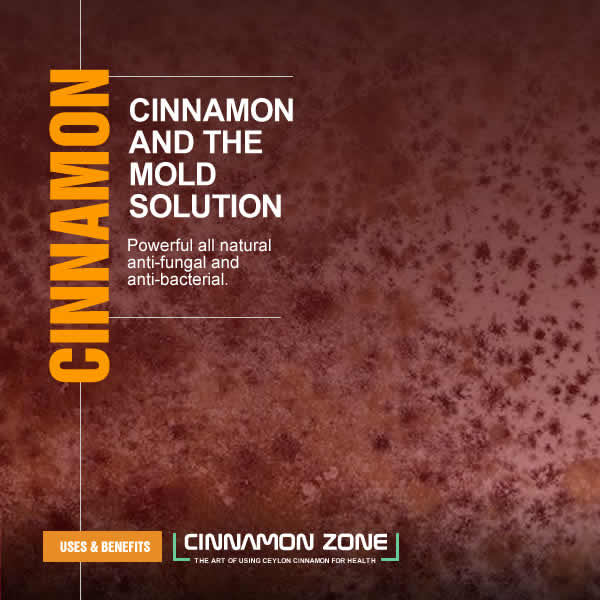 Cinnamon is a powerful anti bacterial agent that delivers many other health benefits and applications. so you can use it for multiple purposes, not just for mold.

Please note this is to prevent and remove small mold spots that build up under the sink, bathroom and showers. If you have a massive mold problem in the walls, air vents and other areas often caused by water leaks, then you need to get professional help to remove walls, fixtures, air vents and the like that have been too badly contaminated so that the only option is removal.

You also need to address the cause of water leaks or high humidity. Ceylon Cinnamon Leaf is merely an aid to prevent and remove small mildew spot in damp areas.

According to the Journal of Agricultural and Food Chemistry, after 3 days of storage, almost complete mold inhibition was obtained with 6% cinnamon essential oil coated food packaging.

Remember only Ceylon Cinnamon Leaf Oil with minimum 75% Eugenol content is the most effective against Mold. Cinnamon extracts, synthetic Cinnamon Oil formulations, Cassia Cinnamon oil with it's lower Eugenol content and blends do not work. So if you are getting Cinnamon Oil get the best. You can also use

Ceylon Cinnamon Bark Oil for mold which is even more effective, but the cost is prohibitively expensive. The Ceylon Cinamon Leaf Oil is far more cost effective and works nearly as well.

Around the bathroom we would suggest you first scrub the mold with a 1% Ceylon Cinnamon leaf Oil and water solution. Wear a mask, gloves and eye wear (if possible). Rinse, wash the whole bath tub/shower, dry all surface areas and then spray 100% Cinnamon Leaf Oil on areas that has visible mold spots and leave it to dry naturally overnight or during the day.

If the situation is severe it would be better to remove the caulking and put new anti mold caulking. But regular use of Cinnamon Leaf Oil to disinfect your bath and shower will prevent mold growth that slowly creeps up on you and also reduces the chance of foot infections like athletes foot from the shower floor.

Under Kitchen Sinks, spray the 1% Cinnamon leaf Oil and water solution, wipe with a micro fiber cloth, rinse with water, repeat. Then spray 100% Cinnamon Oil and leave it to dry naturally. Make sure you remove all clutter under the sink. Under sink areas should not really be used to store things.

Not for Pregnant Women - While even at 100% concentration Cinnamon Oil is safe to breath, we do not recommend prolonged breathing of pure Cinnamon Oil. Not that anyone would do it, just saying. Pregnant women should not use Cinnamon Oil as it may cause premature labor contractions.

This Finnish study of children aged 1-7 exposed to visible mold found that 13.2% of children developed physician-diagnosed allergic rhinitis during the study period.